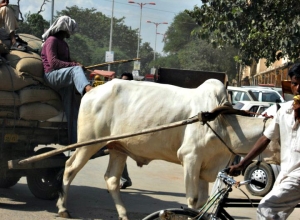 The Kenyan authorities recently calculated that traffic jams in Nairobi cost the economy $600,000 per day. That’s one city I haven’t had the pleasure of visiting recently, but a couple of others have been impressively, depressingly, frustratingly clogged with vehicles. I don’t know whether I’m the only stressed consultant who dreams about missing flights – well I do, sometimes, but I’ve never dreamt about being late for a presentation I was due to give. That’s what happened to me recently in Dhaka, when I was due to give my debriefing presentation to some 40 assorted government, donor and NGO people on the last afternoon – and was an hour and a half late, after the rather short journey from the main government complex to the presentation venue ground into gridlock. I was cheerfully forgiven (or so it seemed) when I eventually panted into the room – that’s life in Dhaka, was the general verdict. In Dar es Salaam, the dream almost came true on a recent departure: following rains, the main highways out of the city were totally clogged. The driver had wisely suggested leaving plenty of time. As we sat motionless (save for the hands on my watch), I began to contemplate doing what another consultant friend eventually did on the way to Dar airport: leap out of the car, hail a passing motorbike, and sit on the back the rest of the way, holding his suitcase on his head. But we made it, after the driver laconically announced that he would have to go “out of procedure”. Fifteen kilometres took us two and a half hours. Jerusalem roads, by contrast, were orderly, efficient and flowing – save at the start of Ramadan, when large numbers of worshippers were allowed in from the West Bank to visit the holy sites. All flow then ceased in parts of the city.

I set my personal record in Jakarta. At the end of the first day, the office we were visiting kindly drove us back to our hotel. It took an hour and 40 minutes. The next day we walked. That took 12 minutes.

Sustainability: what do we think we mean?
2 Comments