This is written at the desk of Martin Adams, who has been a leading figure in Mokoro for several decades but, sadly, announced his retirement at the company’s Quarterly Meeting, just hosted by him and Gerda at their lovely home in rural Denmark.

Both Martin and I were strongly influenced by A.T. (Dick) Grove, who taught Geography in the University of Cambridge and was a leading scholar of African geomorphology and palaeoclimatology. I was fortunate enough to be Dick’s pupil for my three undergraduate years at Downing College. Immediately after I graduated in 1975, Dick gave me a few weeks’ work helping to organise what I think was the first international conference on desertification. I still have the draft of the telegram I composed to Adams, Huntings, Khartoum, about arrangements for Martin’s travel to the conference.

In the end, unfortunately, Martin couldn’t make it to Cambridge for that conference, so it would be many more years before I could meet the man of whom I had heard so much. In the late 1990s we often worked, wrote and spoke together, being both based in South Africa – he as a senior adviser on land policy in the new democratic government’s Department of Land Affairs, I as a researcher and consultant at the Programme for Land and Agrarian Studies (PLAAS) at the University of the Western Cape.

It was at a land conference in Cape Town that Martin urged me to consider Mokoro as a professional home if I ever went into independent consulting, explaining the company’s commitment to high quality work and companionship and saying what a satisfying way of working he had always found it to be. After some further years (and a chance meeting with him in the Fairview Hotel in Nairobi) I did indeed begin to appreciate those qualities and found a different framework for continuing friendship with Martin.

So now, generously accommodated by him and Gerda in the room where his desk is, I find myself looking at his bookshelves, and thinking how they span and sum his huge and wide-ranging interests and achievements – much overlapping with my own interests, though my achievements are hardly comparable… Here is a volume on The Physical Geography of Africa, actually a festschrift for Dick Grove to which Martin contributed a chapter on Savanna Environments. Next to it, The Ecological Survey of Zambia, an edited reprint of the fascinating traverse records of C.G. Trapnell, including many old photographs of Mongu and other familiar haunts. Along the shelves, numerous books on land law in African countries and beyond; Stephen Sandford’s Management of Pastoral Development in the Third World; various scholars’ studies of land reform in South Africa and several other countries (a major field of Martin’s own work); reports of Commissions of Inquiry into land issues in Kenya; studies of African soil science and ecology; great tomes on The Oil Palm, The Agriculture of the Sudan, Farm Management in Peasant Agriculture… His library reflects what a career he has had, what good work he has done, from Fiji to Guyana and especially in Africa. I won’t try to enumerate all that he has studied, researched, written and produced, but I will say what a good colleague he has been to us in Mokoro, what an inspiration he has been to me personally, and how much we look forward to staying with him in the Mokoro community, even if he is no longer on the consultancy trail with us.

And, of course, we look forward to another book appearing on his and our shelves. He has written several already. Now, as Robin Palmer of Mokoro was urging, we need one more, summing up his life’s work and the issues and concerns he has found most important. Robin, another distinguished and principled scholar and activist in the African land sector, was with us here in Denmark. Here is a picture of him and Martin. For me it was very special to see them together. The rest of us have some high standards to aspire to. 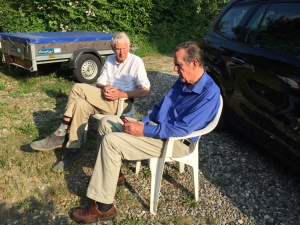