When I was young, I was taught through my Maasai heritage that a woman is the property of her husband and is valued on the basis of how many children she can produce – and not by her education or economic success.

I was also taught that the position of Maasai women is lower than that of men. If a man came in, I had to give him my chair, regardless of age. I should even give my seat to my own son, so long as he is circumcised. A woman can only sit on a chair if every man is already seated.

When I became older and went to school, I learned that men and women have equal legal rights and should be treated equally. Education transformed my beliefs and made me think about what I could do to help everyone understand that they have the same right to be heard and to make decisions.

I am now the Gender Officer at the Tanzanian NGO, HakiMadini, where I lead the field team for a five-year project on women’s land tenure security (WOLTS). Our project has involved fieldwork in two Maasai pastoralist communities affected by mining investments, Naisinyai village and Mundarara village.

When we first started, I noticed that women in the villages would stand or sit on the ground during meetings, especially when men and women were gathered together. Women would often arrive first, but gave up their chairs to men as they came along. Women also had a tendency to sit together on one side of the meeting rather than mixing with men. Reminiscent of my own upbringing, this reflected cultural norms that were accepted and instilled from childhood. 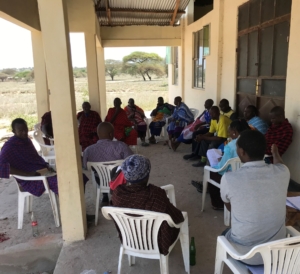 Slowly, as the project continued, I noticed that the seating arrangements were changing too. Women were no longer sitting on the ground, young circumcised men were giving their chairs to old women, and young women were giving up their chairs only to old men, as a sign of respect, and not to every man.

I even saw a sub-village leader who said “How can a property own a property?” change his mind. At the beginning, when we first met him, he said what I was taught as a child – that a woman is the property of her husband, and therefore could not own property or land.

Through our project, this man has changed completely. I have even heard him say “Women deserve to own property, including land, just as men.” And just a few months ago he retired from his community leadership position and has been selected as a WOLTS ‘champion’ by his fellow community members. This means he has committed to actively work to support gender equity and improve land rights for women and vulnerable groups in his village.

When I return to the villages, I now see women sitting on chairs during meetings more generally. Some traditional leaders are giving support for female leaders (and sometimes all women) to be given chairs during meetings. Women have informed me that they are also receiving chairs in other meetings, such as political party gatherings and church seminars.

It seems that the WOLTS project has made this difference. Of course it is more than just giving women seats; these small signs indicate evolving power dynamics. When women are given a seat, they are given a stronger voice and a foundation of respect.

These changes have taught me that cultures and people are not rigid. Despite long-standing traditions, when people have the chance to talk to each other, things can change. I am now much more hopeful that future generations of Maasai can have a better society, which treats women as first-class citizens, equal with men. I look forward to returning to Naisinyai and Mundarara to see what happens next, and taking their stories of change to other villages and districts too.

Joyce Ndakaru works as Gender Officer with the Tanzanian NGO, HakiMadini. She is a core team member for the global WOLTS project, which is carried out in Tanzania by HakiMadini with Mokoro Ltd, a UK-based not-for-profit organisation.