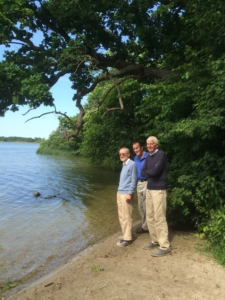 I have now been running the Land Rights in Africa website for 20 years. It existed in Oxfam space from 2000-2012 and has been in Mokoro space since 2012. So a HUGE THANK YOU to Mokoro for agreeing to take on the site in 2012 when Oxfam suddenly pulled the plug – and for maintaining it over the past almost 8 years. Thank you to Stephen Lister for initially agreeing to the move, and to Fran Girling, Zoe Driscoll and Zoe Millington for managing the site.

In 2013 Rachael Knight referred to it in these words: ‘This is the BEST source of writing on land rights in Africa on the entire internet. I am not kidding’ she told her colleagues at Namati.

I spent almost 10 years teaching African History at the Universities of Malawi and Zambia after writing a PhD on the politics of land in Rhodesia. Then in 1987 I landed a job with Oxfam and stayed there for 20 years!

During my first 8 years I was attached to Oxfam’s Southern Africa Desk in Oxford, initially as a Desk Officer and then as a Regional Manager. Those jobs involved travelling a good deal in Zimbabwe, Zambia, Malawi, Angola and Mozambique, often quite ‘deep in the bush’, meeting people in both civil society and government.

That ended in 1995 and I then became Land Rights Adviser for Africa which involved more travelling, making use of the contacts I had by now established in both the academic and the NGO worlds. It was essentially a networking and communications role. The context was one of increasing pressures on land, of new land laws and policies being drafted, and national NGO land coalitions and alliances being established. It was also a context of post-Cold War triumphalism. The donor (especially World Bank) answer on land was a simple one – privatisation.

Changing technology and the origins of the Land Rights website

Another context in the 1990s was rapidly changing technology – the coming of mobile phones, emails and the internet. This was of enormous potential benefit for a land rights adviser. I was able to download African newspapers, look for articles on land and circulate them to Oxfam staff and civil society organizations. With their encouragement I compiled a 306-page literature survey called Contested Lands in Southern and Eastern Africa, which was published as an Oxfam Working Paper in October 1997. In a review Deborah Potts of SOAS concluded: ‘for anyone starting work on land in Africa, read Palmer’s introduction. It’s worth a month in the library.’

Such was the context in which the Land Rights in Africa website was launched on 6 January 2000. In an introduction in December 1999 I wrote:

In recent years Oxfam GB and many of its partners in Africa have become increasingly involved in the issue of land rights.

This is because access to land, which remains for many people in Africa the ultimate form of social security, is being severely threatened. The threat comes from a combination of local and international factors, which include excessive liberalisation, the search for foreign investment, and an often-blind faith in market solutions. So, in many places a land grab reminiscent of the original Scramble for Africa is currently underway, involving mining investors, tourist speculators, ruling elites and corrupt chiefs.

There has also been a rash of new land legislation and policies, especially in East and Southern Africa, which potentially threatens the interests of the poor.

In response, local NGOs have endeavoured to help communities become more aware of their rights – and determine how best to demand and defend them. They have also vigorously lobbied their governments as well as key donors such as the World Bank and DFID.

The documents gathered together on this website illustrate some of these struggles, which will certainly continue and remain highly significant for many years to come, as people continue to strive for sustainable livelihoods in what, all too frequently, has become very inhospitable terrain.

I initially saw the website as a place where, in a context in which the rich and powerful tend to control both power and information, I could disseminate arguments in favour of pro-poor land reform and where I could publicise the work of e.g. the new land alliances in South Africa, Uganda, Tanzania and Kenya. In the early months of 2000, I was receiving comments such as:

Brilliant! Great work – keep it up! Have already alerted my students to the site. (David Simon).

The land stuff is really good. Great that more people across the globe will be able to access the site. (Nicola Sutherland).

There have been overwhelmingly positive responses to this website as it has grown over the past 5 years. It seems that a wide range of people, including many for whom it was not primarily intended, such as law professors, have found it both informative and helpful. So it has not proved difficult to solicit contributions on topics such as women’s land rights, or on countries with interesting experiences to offer, such as Mozambique and South Africa. Journals have also often been generous in allowing reproduction of articles on this site. Significantly, NGO land alliances and coalitions have welcomed the ‘oxygen of publicity’ it has afforded. A serious attempt has been made to present materials which are brief, topical and written in accessible language.

In the early stages I saw it as very much an Oxfam site, supporting the work that Oxfam programmes and allies and I were all trying to achieve – finding voices for pro-poor land reform. Later I widened the scope and moved towards a broader range of entries comparable to those which appeared in my 1997 literature survey.

In February 2007 Oxfam retired me – after 20 years. Shortly after that came the global financial crisis which sparked off an intensified global land grab as grain prices escalated, some grain exporting countries banned exports, many dry countries sought greener pastures elsewhere, and there was huge speculation about biofuels. This was a development which, as Oxfam’s Global Land Adviser, I had totally failed to predict!

An experience in Southern Africa in 2008 persuaded me that I might usefully spend time compiling bibliographies to help create greater awareness of the global land grab and its possible future implications for Africa. So from 2009 I posted a series of select bibliographies, prefacing them with this comment:

I have been compiling select bibliographies on ‘Biofuels, Land Rights in Africa and Global Land Grabbing’ for the past 5 years. My prime motive was to attempt to arouse awareness of what I regard as a very dangerous phenomenon with likely extremely serious long-term consequences for small-scale farmers across Africa. I’m delighted to note that awareness has certainly been raised – in the media, in research institutes and pressure groups, in international NGOs and, increasingly, among academics. We are now seeing some serious books being published on both land grabbing and biofuels. With new material appearing at such a rapid rate, my fears of a dangerous conspiracy of silence have long abated.

The move to Mokoro

Oxfam clearly appreciated my work sufficiently to allow me to keep on running the Land Rights site after it retired me in 2007. This continued until March 2012 when Oxfam decided that it now had doubts about retaining the site. Mokoro immediately agreed they would happily take over the running of the site.

My experience has been that people generally have been very happy to have had their work posted on Land Rights in Africa. I often consciously sought out people whose work I respected and frequently people have approached me asking if I could post their work.

In the early years of the site, I managed to post a few journal articles with the consent of the publishers. In more recent years however, as access to journals has generally become more ‘privatised’, this became increasingly difficult.

I have managed to post the odd PhD, including 3 on Zimbabwe!

There are also a few films and videos.

In recent years, the weekly update from GRAIN’s farmlandgrab.org, which tracks the global land grab and people’s resistance to it, I have found extremely useful – though often deeply depressing.

Some sort of conclusion

The website contains an extraordinarily diverse range of subjects and authors. Some of the most striking work covers attempts to address power inequalities at local levels through legal education with paralegals and community mapping (see the work of Rachael Knight and Lorenzo Cotula); to strengthen organizations working with women (following the example of the late Kaori Izumi); on the impact of HIV and AIDS (again Kaori Izumi). An entry from May 2019 is called How satellites can locate potential land grabs in Africa!

Reaching this 20th anniversary has made me ask myself this blindingly obvious question – in the context of pro-poor land reform, are things any better now than they were back in 2000? I rather fear the answer!

Later this year, inshallah, I shall reach 4 score years, which raises the obvious question – what next for the website?