In 1964, I went with my parents and my brother to live in Lesotho. Since then, there have only been two years when I did not set foot there at all. In quite a few years, I was living and working there. Across all the others (except 1972 and 1975), I have made many short visits to the Mountain Kingdom, which has become my second home.

In 2019, I went with Mokoro team mates to Timor-Leste. I had never been there before. I have now spent about five weeks in total on three working visits. Despite my best efforts, I am still only thinly informed about the republic that occupies the eastern half of the island of Timor.

Although so ignorant (and I apologise for any mistakes in what follows), I was quickly intrigued by Timor-Leste – because of my background in that distant southern African kingdom. It’s a weary expectation that just about every consultancy report on Lesotho begins something like “Lesotho is a small mountainous country completely surrounded by the Republic of South Africa”. Although it has diminutive company in the region, in the form of the even smaller kingdom of eSwatini, Lesotho is well known for being small – although if you ironed its mountains out flat, it would be a lot bigger.

The Lesotho coat of arms

And then I found myself in Timor-Leste, which is about half the area of Lesotho (14,919 km2, compared with the Mountain Kingdom’s 30,355 km2) and has a little over half the population (1.3m versus 2.1m). Fascinating for me to be working in a country even smaller than my second home!

You might think this is all geographical pedantry. I’ll come back to why I think it’s really interesting. First, some other comparisons.

The crocodile is special in both countries. The Basotho people of Lesotho are divided (amicably enough, on the whole) into clans, each with a sacred animal. For the ruling Bakoena clan, to which the king and most chiefs belong, that animal is the crocodile. No surprise, therefore, that this royal reptile has a central place on the national coat of arms – despite its long absence from the country. For the people of Timor-Leste, I am told, the crocodile is special too, somehow embodying and representing the ancestors – and therefore to be honoured, respected and even fed when it shows up on the beautiful beaches – as it quite often does .

A crocodile at the beach near Dili, Timor Leste (Photo by Henriqueta Da Silva)

For the Basotho, the wars were in the 19th century, as they lost most of the territory then known as Lesotho to white settlers and were forced up against, and into, the harsh high Maloti Mountains. Their founding king never suffered absolute military defeat, but he would have if he had not eventually appealed to Queen Victoria for protection. Political and economic oppression continued into the second half of the 20th century, as British and South African interests aligned to make the kingdom an impoverished, overcrowded labour reserve. That Lesotho exists now as an independent nation is due to a long saga of political machinations between London and Pretoria, with the former only deciding in the 1950s that it would not, after all, countenance its little protectorate being absorbed by South Africa.

The original reason for Timor-Leste to be a distinct entity seems to be a battle that took place between the Dutch and the Portuguese in 1749, although the division of the island of Timor between the two colonial empires was only formalised by the Treaty of Lisbon in 1859. The collapse of Portuguese rule in Timor-Leste and the rest of that empire in 1975 was swiftly followed by the Indonesian invasion and the warfare and suffering that saw about a quarter of the population killed by fighting, famine and disease. While Basotho enjoyed a relatively orderly transition to independence in 1966, the people of Timor-Leste could only vote in an independence referendum in 1999, becoming a sovereign republic in 2002. The United Nations Integrated Mission in Timor-Leste was only terminated in 2012.

From the perspective of political history, both Lesotho and Timor-Leste are improbable little scenes of 19th and 20th century suffering that have ended up as independent nations, sitting in the United Nations General Assembly alongside states that are vastly bigger and more powerful. More locally, both are victims of their geography. Timor-Leste, too, would be a lot bigger if its beautiful hills and mountains were ironed out flat. Every kind of development is constrained by the terrain: I wonder which country counts more hairpin bends in its potholed, bumpy road network. Pope John Paul II ended up driving from Johannesburg on his visit to Lesotho in 1988, ‘bad weather’ making the planned flight impossible. (“Man proposes, God disposes”, said the devious foreign minister of the apartheid regime, only too glad that after all His Holiness would have to set foot in his country.) The following year, the Pope was in Dili. Both capitals have podiums erected for the occasion.

Unlike the Mountain Kingdom, Timor-Leste does have a coast, and its own little port at Dili; but commercially it is dominated almost totally by its giant neighbour, Indonesia – just as Lesotho is by South Africa, whose rail network extends two kilometres across the border into Maseru. Both countries suffer severe droughts and face major challenges of malnutrition. Citizens of both try to make ends meet through labour migration. Timor-Leste has marine oil resources and has used them to build a sovereign wealth fund that it is currently drawing down faster than it replenishes it. Lesotho’s exports of diamonds and water have earned it some revenues – but those have been poorly managed. Only the comfortable living standards of a tiny urban elite drag the impoverished kingdom’s mean income up enough to make it a ‘lower middle-income country’ in the World Bank rankings. Timor-Leste falls into that category, too.

In both these small nations, politics often confound progress. Lesotho has a long history of venal, often violent political disputes. Perpetual infighting amongst self-interested party factions has led to a massive deterioration in governance and the conclusion of some Basotho I know that their beloved kingdom is virtually a failed state. I did not sense any such scandalous neglect of the public interest in Timor-Leste – but many citizens I spoke to said that political instability makes any kind of development progress much harder than it need be. In January 2020 a revised government budget again failed to gain parliamentary approval in Dili, despite the outright majority held by the governing alliance, and a new coalition of parties is being negotiated at the time of writing – while Lesotho’s prime minister and his third wife prepared to stand trial on charges of arranging the murder of his second wife. 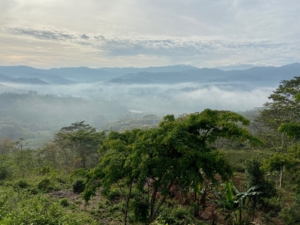 A rural view in Timor-Leste

Both Lesotho and Timor-Leste belong to various larger groupings of nations – from the UN itself to regional bodies. Lesotho (which reportedly lost its UN General Assembly voting rights in January 2020 due to non-payment of dues) has been a member of the African Union since 1966. It has belonged to the Southern African Development Community since its founding in 1980. It has received significant, sometimes not fully welcome, attention from these bodies because of its political instability – most notably during the SADC military intervention of 1998. Timor-Leste may eventually join the Association of Southeast Asian Nations (it first applied in 2011) but has also played a leading role in the g7+ group of countries currently or recently affected by conflict. Like the UN General Assembly itself, these are all ways in which small states can assert their identity in a world dominated by much mightier nations.

Just as during my working visits to South Sudan in 2010, I hoped that the new nation of Timor-Leste, gaining independence around half a century after much of Africa and Asia, would be able to learn from the underwhelming ‘development’ experience of those countries in the second half of the 20th century – that somehow the process would be smarter, faster, more effective when launched all those decades later. As in South Sudan, I have been disappointed. There is a depressing familiarity to the cycles of planning and projects, logical frameworks and development budgets that have lumbered into action in Timor-Leste. In that sense, a civil servant visiting from Lesotho would feel pretty much at home. 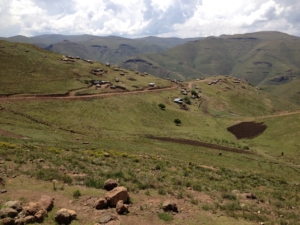 A rural view in Lesotho

For me, small countries like Lesotho and Timor-Leste exemplify the fundamental challenge to the ‘development’ process – a basic reason why we ‘development’ workers have rather little to be cheerful about, half a century after dozens of newly independent nations launched themselves into that process with the enthusiastic ‘aid’ of the global North.

If the United Nations didn’t exist, it would need to be invented. I firmly believe in its essential value for the future of humanity. Yet – from Timor-Leste to Lesotho – we have been transfixed by the notion of the nation state, by the belief that however economically or geographically illogical a country may be, we should labour to build the same, relatively uniform country-based systems, structures and ‘development’ trajectories across these dozens of wildly dissimilar scenarios. The United Nations agencies and the bilateral and multilateral donors are structured to deliver a broadly standardised set of procedures and products across each of these UN member states, on the often unspoken assumption that each can become an autonomously viable economy supported by robust national institutions.

Yet most of us know, deep down, that the strongest drivers of progress, in little countries as well as big ones, have little to do with all of this. This is not the kind of deceit about economic realities of which James Ferguson accused the World Bank in Lesotho, in his seminal “The Anti-Politics Machine”. It is a kind of self-deceit of which almost all of us are guilty, for a range of reasons. I suppose it’s just human nature. The fiction of the nation state as a uniformly viable platform for progress has seemed quite a comfortable one for the last half century, conveniently covering over the political and economic reality that some of those nations will only ever make limited economic progress as autonomous states.

And so I am simultaneously comforted and distressed when I come to know a little about Timor-Leste, a nation only half the size of the Mountain Kingdom, my second home. I quickly make friends with good people in Dili, and am filled with respect for the hard work they do to take their little country forward. And yet, as with my many old friends in Lesotho, I wish we were not captives of this notion that there is only one way forward. I believe – or should that be hope? – that the next half century will see a downgrading of the nation state and more meaningful progress with a broader, more realistic range of concepts, structures and strategies for change.

I will never visit Timor-Leste as often as I have visited Lesotho. But it has made me think. It has taught me a lot. I hope there will be opportunities for it to teach me more.

A step from the ordinary