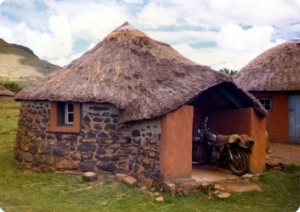 The author’s residence in Lesotho, 1976-77. The World Service on short wave was a constant companion.

From early in my time at boarding school in eSwatini in the 1960s to just a couple of years ago, the BBC World Service was a central part of my life when I was outside the UK. For much of my life, in other words. Radio Swaziland used to relay the World Service news bulletins a couple of times a day. So from a tender age I was familiar with the announcement that millions found reassuring, authoritative, familiar, comforting… “This is London” – and then the rousing signature tune, Lillibullero. My strongest early interest in shortwave was because that was how I could hear music on Lourenço Marques Radio. But by the time I was living in my hut in Lesotho doing Ph.D. research a few years later, I knew the precise frequencies on which the World Service was to be found. For the next 25 years at least, I would fiddle with shortwave radios wherever I was in the world, so that I could pick up the World Service: mainly for the news bulletins, but for plenty of other information and entertainment besides. In its heyday, it broadcast a nine-minute world news bulletin after the hourly time signal, followed by a five-minute bulletin of News About Britain. I knew the voices of all the newsreaders: consummate professionals like Pamela Creighton, John Stone and Roger Collinge. The rest of each hour was often divided into three separate 15-minute programmes, packing in highly condensed sports bulletins and music shows in various genres.

In southern Africa many of the broadcasts came to us from the Atlantic Relay Station on Ascension Island, and sometimes as one found one’s way through the 13, 16, 19, 25, 31, 41, 49 metre bands one would hear the Bow Bells station identity signal chiming clearly through the muffle and crackle of the airwaves. And sometimes some lonely technician on Ascension: “This is the BBC Atlantic Relay Station. Transmission on this frequency is now closing. The BBC World Service continues on….” And he would read out the alternative frequencies and kilocycles. In Maseru we were eventually spoiled by a 24-hour relay of the (still crackly) shortwave broadcasts from a BBC relay station established at Lancers Gap, and for many years in the Netherlands we could hear the World Service on the doughty old 648 kHz medium wave transmitter at Orford Ness across the North Sea.

Broadcasting from its studios at Bush House in the Strand, the World Service used to be famous for its scrupulous impartiality and accuracy – and of course it broadcast in some 40 other languages, with authoritarian regimes like the Soviet Union regularly jamming its transmissions. The Soviets paid it the ultimate compliment, though, by broadcasting their own international news bulletins in English in as close an imitation of the BBC as they could possibly manage. They even trained individual newsreaders to sound exactly like individual BBC broadcasters.  The Soviets’ version of Roger Collinge was uncannily close. In my part of the world we paid close attention to the BBC African Service, enjoying the lively Network Africa show hosted every morning by Hilton Fyle (with its Hugh Masekela intro tune) and tuning in faithfully to the unparalleled news coverage of Focus on Africa in the early evenings, presented by the inimitable Robin White and others (and even now still launched daily by a jerky little cadence of trumpets).

There was turmoil and trauma in the BBC when it was ultimately decided to merge the World Service and domestic newsrooms – highly logical in hindsight, but at the time seen by many as an inevitable dumbing down of the former’s intensely high intellectual standards. For a couple of decades now, the relay station at Lancers Gap has been broadcasting the World Service to Maseru and some distance beyond in studio-quality FM, and there are similar relays in many other cities – although all such technology is now being overtaken by transmission on the internet (including the DAB system that means I can listen to the World Service on my home and car radios here in Manchester). And wherever I am on the planet, with a decent 4G signal on my phone I can listen to the World Service and dozens of other channels via the BBC Sounds app.

Just the other day I saw the World Service coverage of some international event praised on social media by someone who said that the BBC domestic news had done a far inferior job. But overall I find it much less impressive now. It is obviously run on a shoestring. (Foreign Office funding for it has waxed and waned over the decades.) Lillibullero is hardly ever played, “This is London” no longer announced. Continuity announcements are almost all computer operated, you can tell – because it’s the same Scottish woman’s voice around the clock. And if you really are out in the bush somewhere, it’s very hard to find the World Service on short wave any more. Those who know me are aware that I am a man of simple delights, often happy to be sitting way out in the Okavango, in a guest house in rural Tanzania, on a rustic verandah looking over some African river, with a cold beer at sunset. On countless such happy occasions, I have had a little shortwave radio at my side, with the World Service crackling through the ether to keep me company.

I empathise with Stephen’s forensic but nostalgic take on the World Service. That was all we had in my 1960s life in Tanzania and in Botswana in the 1970s and early 1980s. At news time, I would be lying on a sweaty sofa (in DSM) fiddling with the dial saying “Come in Bush House, come in Bush House….” and it would usually answer my call in its crackly tones.

During the 1970s, Botswana was quite tense with the Rhodesian Bush War next door on its northern border. Working and travelling in those areas for the Ministry of Agriculture, I would come across unarmed ZAPU guerrillas who had crossed the border for R&R. Plus we had apartheid spillover and the Soweto uprising on the eastern border. But World Service would always and reliably let us know what was going on.

World Service has definitely gone down market. Every news item now has to have a silly jingle, very annoying. Paddy O’Connell on Radio 4 is also annoying since he hijacked my BH for Bush House and replaced it with his BH for Broadcasting House.  Bush House is now part of King’s College, London.

But my BH is still good value for us internationals with its strong global programming and string of foreign correspondents. And it’s great as an antidote for my insomnia and occasional middle of the night anxieties with its soporific ability to distract.

Sustainability: what do we think we mean?