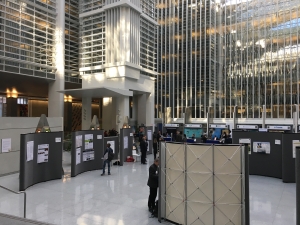 In March I was pleased to attend the Annual World Bank Conference on Land and Poverty on behalf of Mokoro, alongside Chris Tanner. With more than 1,250 participants from over 130 countries, representing government, academia, civil society and the private sector, the Land Conference continues to be the leading global forum on land governance. This year the title was ‘Responsible Land Governance—Towards an Evidence-Based Approach’, with the focus on on the role of data and evidence for realising land policy reform and identifying strategies for working at scale and monitoring achievements.

The opening plenary highlighted the importance of recognising land as multi-sectoral, with the need for development programming to be interconnected and for much more integrated thinking with collaboration from land experts across other sectors.  Without a more holistic approach to development, well intentioned reforms and policies in the land sector risk being hindered because they are not supported by measures in other sectors. The plenary also emphasised the importance of making data and analytical tools more publically available, with a need to improve awareness of new approaches and technologies, as well as making them available and openly accessible to government and practitioners. Presentations included one from Matthew Hansen, a remote sensing scientist from the University of Maryland, who has opened up a wealth of data on changing forest cover to the public. He highlighted the importance of transparency of methods and data to facilitate the use of land change information by policy and science applications. Following on from him, Izabella Teixeira, the Ex-Minister of Environment in Brazil, who drove the rural environmental cadastre, talked about using remote sensing data for public policy and politics and the ability to present the reality from data in designing and implementing strategy and policies. She stressed the importance of measuring to make good policies and also in helping her to check the facts of arguments from other people. Finally Andrew Steer, Head of the World Resources Institute, presented on their work to create open access to data and the need to present data in a meaningful way and have the right messengers to convey it. Data can be a vital tool for civil society groups to expose issues, for journalists in exposing wrongdoing, for releasing fire alerts from space, for improving government enforcement, and in shifting global dialogues (the list could go on…).

I was at the Conference to present a poster titled ‘Action-Oriented Strategic Research for Improving Responsibility and Gender-Equitability of Land Tenure Governance’, which I prepared jointly with Elizabeth Daley and which featured the ongoing experience of Mokoro’s long-term practical and action-oriented strategic research project on Women’s Land Tenure Security (WOLTS). The poster outlined our participatory, quantitative and qualitative WOLTS methodology and approach, and highlighted the importance of using a medium- to longer-term lens to assess real change in gendered social relations at community level with respect to land. It also emphasised the importance that WOLTS places on capacity development with local civil society partners, governments and communities to empower them to support and monitor changes in local land governance, land tenure arrangements and social norms over time – and thus to develop local capacities to support gender equity and specifically protect the land rights of the most vulnerable people. It was a great opportunity to share ideas and gather feedback from experts working at all levels in the land sector on the WOLTS approach. There was particular interest at the conference in the long-term approach we are taking with WOLTS, which recognises the need to wait and see whether any changes supported by the project will influence long-standing social norms around local gender relations and land tenure arrangements and practices. It was also clear to me that there was a lot of interest in our initial focus within WOLTS on the links between mining and land tenure security, given that we are initially working in pastoralist communities affected and threatened by investments in mining in Mongolia and Tanzania. WOLTS is certainly addressing a gap in research and knowledge here. I attended numerous sessions throughout the week on large-scale land acquisitions (LSLAs). All but one of these focused on agricultural investments, and one presenter who spoke about the impact of LSLAs on rural households in Tanzania seemed not to feel the need to clarify that it was agricultural investments only that they had studied. There seemed to be an understanding that when we talk about LSLAs, we are talking about agricultural investments rather than any other kind.

The Conference is, to say the least, overwhelming and hectic. At any one time, there may be thirteen sessions, each with up to six speakers presenting their papers within an hour timeslot – so well over 60 papers fighting for your attention at one time. It would have been impossible to make it to every presentation that grabbed my eye. I dodged the deeply technical sessions on drones, geo-spatial technologies and blockchain, which I know very little about, and was able to attend a variety of sessions on issues covering pastoral land rights, global movements and agendas to secure land tenure security, gender equality, land policy in Africa, and experiences on large-scale land acquisitions. I was also able to attend presentations on three papers that Mokoro Principal Consultants were authors of this year. Chris Tanner co-authored ‘Doing (Inclusive) Business in Guinea Bissau: Re-activating the 1998 Land Law‘, alongside Camille Bourguignon from the World Bank, and ‘A Programme for Improving Land Governance Transparency in Ethiopia‘, alongside Tigistu Gebremeskel Abza from the Ministry of Agriculture in Ethiopia.  My WOLTS colleague Elizabeth Daley also co-authored ‘Pastoral Women’s Land Rights and Land Use Planning in Tanzania: Experiences of the Sustainable Rangeland Management Project‘ with Naseku Kisambu, Fiona Flintan and Sabine Pallas.

It was good to see a significant representation in the presentations of issues concerning vulnerable groups, including pastoralists and women. However, despite an active women’s caucus, which collected at lunch time every day to drive the agenda on women and land, and numerous presentations and sessions with ‘women’ and ‘gender’ in their titles, gender was missing from the heart of the conference, most notably being ignored by the plenary sessions. The faces at presentations on gender and at the daily women’s caucus, over 90% of whom were women, became familiar, and there was a significant lack of participation in these fora from senior government representatives and policy makers, of whom there were many. As noted in the women’s caucus, the low priority given to the presentations on gender went as far as the Conference organisers giving the gender sessions a building of their own, away from the bustle of the Conference and in a room that could only be reached through a maze of corridors and underground tunnels – not encouraging anyone to join them! It was clear to me that there was a divide at the conference between, and I hesitate to use this word, a ‘clique’ of those working on gender and land, and everyone else. It seems to me that the Conference organisers, going forward, need to make efforts to integrate gender discussions into all areas of the conference and move away from gender being an independent topic.

A particularly enjoyable end to the conference was provided by the masterclass sessions that filled the final day. There were workshops held on everything from using GIS, to tools for communicating and advocating the issue of land rights, to brainstorming sessions on land indicators. Unlike the presentation sessions earlier in the week, which felt hectic and time-constrained, with limited time for discussion, these sessions gave time for audience participation, sharing and networking, which was extremely valuable.

The conference certainly is an impressive event and attracts a significant audience, making it a unique opportunity to share research findings and influence the shaping of future land agendas.  Mokoro look forward to continuing to engage at future World Bank land conferences and being able to share more on our WOLTS project as it progresses.