Women the world over are grossly under-represented in the realm of political participation and leadership. This trend is a significant hindrance to democracy and one that both developed and developing countries struggle to contend with and put right. However, the small landlocked nation of Rwanda opposes this trend of gendered marginalisation and has received wide acclaim for having the highest percentage in the world of female MPs elected into government (65%, compared with the UK’s 29.4% and the United States at 19%). The real Rwandan miracle is, however, not simply a statistical one. Rwanda’s female and male parliamentarians have ensured that equal membership of parliament translates into wider development objectives which support the needs of women and children specifically, as it is these groups which are most acutely vulnerable to poverty and have the greatest barriers to overcome. Rwanda’s achievements over the past two decades can only be truly appreciated when we consider the horrendous devastation of the 1994 genocide. For many people, Rwanda is a nation defined by this genocide, but it is now making headlines for much more positive reasons and is leading the way on female political leadership.

Rwanda is located in the Great Lakes Region of Central Africa and has the highest population density of any country on the African mainland (459.1 people per km2). Despite meeting many of the millennium development goals by last year’s deadline, Rwanda remains a poor country with 44.9% of the population living under the poverty line. The country has been governed by the Rwandan Patriotic Front since 1994, led by President Paul Kagame.

Mokoro’s seminar on the “Impact of Women’s Political Leadership on Democracy and Development in Rwanda” took an intricate look at how this success story has developed out of such tragedy. Professor Shirley Randell was invited to lead the seminar and share her experiences of working in Rwanda with many of the key political figures responsible for fostering women’s empowerment. Dr Randell acted as Senior Advisor for the Netherlands Development Organisation (SNV) in Rwanda during 2006-08 before establishing the Centre for Gender, Culture and Development Studies at the Kigali Institute of Education in 2009. She established the Rwanda Association of University Women which has grown to over 1000 members including female parliamentarians. She has also recently completed research for the Commonwealth on the Impact of Rwanda Women’s Political Leadership on Democracy and Development, which you can read here. Dr Randell was therefore very well placed to lead a discussion on women’s political empowerment and respond to participants in the event who included consultants, academics and NGO representatives.

In the aftermath of the genocide, women’s associations regrouped to assess the enormity of the challenges facing a country devastated by violence. The diasporic communities which had fled the country during the conflict began to steadily return and women’s associations played an active role in the reintegration of these people. Significantly it was women from both sides of the conflict that were working together to build a peaceful future which included encouraging and supporting reconciliation. 70 per cent of the population of post-genocidal Rwanda were women and the Rwandan Patriotic Front led by General Paul Kagame identified that these women would have a huge say on how the country would recover. Dr Randell noted that it was at this point that women began to have a voice in Rwandan politics and could design policy which explicitly created opportunities for women. These opportunities became constitutional rights in 2003 and included the prohibition of sex discrimination, equal rights in marriage and divorce, the right to equal pay and the right to education. Also included in the constitutional reform were quotas for the representation of women at all levels of decision-making.

Dr Randell highlighted several key areas where women’s rights and participation have been championed, resulting in positive change, the first of these being land ownership. Two pieces of legislation transformed women’s access to land: the Succession Law (1999) and the Land Law (2005). Through these laws women were granted equal inheritance rights which would be protected after marriage and equal rights to procure land. Currently 26 per cent of land in Rwanda is owned by women, 18 per cent by men, and 54 per cent is jointly held by both spouses (2% others). This was a hugely significant step for Rwanda where 80 per cent of the population identify as farmers. The impacts this legislation had were profound as with land entitlement more women became eligible for credit and could pursue alternative income-generating activities. Similarly, the government introduced agricultural programmes to help the poorest farmers, who were usually women, and develop community cooperatives to improve agricultural practices. Dr Randell made the connection between fairer land laws and the progress Rwanda has made in lifting one million people out of extreme poverty. The revival of this sector can therefore be recognised as a significant element of Rwanda’s economic recovery as agriculture currently contributes a third of GDP. The recovery is not confined to economic indicators of gender equality, instead the approach has been all encompassing across social and cultural issues.

Rwanda has undergone substantial social changes as part of the recovery from the genocide and whilst it can be argued that these changes were imposed through necessity (in terms of women undertaking traditionally male gender roles) the drive to sustain female empowerment should be commended. Gender-sensitive budgets were introduced into all ministries to level the playing field between men and women, girls and boys. Two examples of the impacts this approach has had concern education and health. Rwanda has achieved the millennium development goal of universal primary education for girls and boys and has gone further to ensure that more girls are able pursue higher education. Health indicators have also drastically improved including those that explicitly affect women; for example, maternal mortality rates dropped from 1,070 per 100,000 in 2005 to 476 in 2010. There has also been an unprecedented reduction in fertility rates: 6.1 children per woman in 2005 dropping to 4.1 in 2010.

Women’s political leadership is apparent at all levels from national to district to cell level and it is this structure that has been the foundation for so much success in Rwanda. Aside from there being a majority of MPs who are female, 50 per cent of judges in the supreme court are women and so are 40 per cent of provincial governors. Institutional mechanisms have been vital for the advancement of women in Rwanda including the National Women’s Council, Gender Monitoring Office and Rwanda Women’s Parliamentary Forum (FFRP). It is these institutions which have ensured that there can be lasting change in Rwanda and deeply entrenched cultural challenges such as gender based violence (GBV) can be overcome. GBV was first criminalized in 2008 with the Law on Prevention and Punishment of Gender Based Violence. Dr Randell recounted the difficulties in attempting to pass this piece of legislation through the male-dominated senate, though it was eventually passed having gathered support at the local government level. Crucially it retained a clause on marital rape and, unlike in other parts of the world, the law has been enforced effectively and support systems have been designed including a free telephone hotline, counselling, training of police on GBV and facilitation of community-based approaches to the issue. 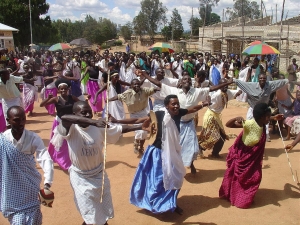 The discussion that followed Dr Randell’s presentation threw up some of the challenges now facing Rwanda in terms of women’s political empowerment and the difficulties in attempting to replicate what has been achieved there in neighbouring countries. The participants echoed a theme throughout the seminar which was that men and women have a responsibility to support gender equality in aspects of politics and wider development. A participant also noted that support for gender equality in a general sense doesn’t always translate into positive results, and that the legal quotas for participation enforced in Rwanda should be adopted by other governments. This point is best summed up in the following quote used in Dr Randell’s presentation;