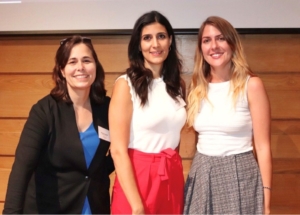 Mokoro’s evaluation of UNICEF’s contribution to education in humanitarian settings is currently in full swing, and we felt this was an opportune time to convene a seminar exploring this nascent and important branch of humanitarian action. As such, on 21 June 2019 we were extremely excited to welcome several practitioners working at the forefront of Education in Emergencies (EiE) to speak at Wolfson College, Oxford. Our panel consisted of Hiba Salem (University of Cambridge), Allison Anderson (Brookings Institution), and Marie Tamagnan (Save the Children), all of whom brought a unique perspective on EiE gained through research and implementation across diverse contexts. The seminar was chaired by Mokoro’s Muriel Visser, who is currently leading the team evaluating UNICEF’s global EiE work.

Hiba Salem, who is coming to the end of her doctoral studies at the University of Cambridge, shared with us the methods, drivers, and findings of her research, which explores Syrian refugee students’ perceptions of their experiences in Jordan. Key themes were the ways in which the double-shift schooling system affects social cohesion, the reasons for the high dropout rates among Syrians, and trying to understand how students’ experiences as outsiders in Jordan affect the way they view their education

As Hiba explained, since the outbreak of the Syrian Civil War in 2011 there has been a huge influx of Syrian refugees into Jordan, which has put tremendous strain on service provision in the country. To accommodate school-age refugees, the Jordanian Ministry of Education has implemented segregated double-shift schools, where Jordanians attend in the mornings and Syrians in the afternoons. This separation of refugee and local students reduces the potential for understanding and cohesion, often leading members of one group to fear the other. Bullying and violence – often directed at Syrian students – is a major problem in these double-shift schools. Furthermore, the reduced learning time has negative impacts on refugees and locals alike.

As part of her research, Hiba interviewed 40 boys and 40 girls between the ages of 13 and 16, as well as speaking to some of the teachers working within the double-shift system. A key issue that arose was that of what comes after education – most Syrian refugees are not permitted to work in Jordan, so how valuable do they perceive education to be? The lack of viable work opportunities causes boys and girls alike to drop out, the latter often being married off at an early age, a once declining practice that is now resurgent in a context of limited alternatives.

Despite the challenges she described, Hiba offered us some ways forward by emphasizing the positive impacts that small initiatives can have. In particular, she described a programme implemented by Generations for Peace that enables Jordanians and Syrians to meet and do various activities together, such as making art, cooking, and playing sports, which encourages recognition of their common humanity and helps create positive feelings about integration.

Allison Anderson gave a general overview of Education in Emergencies and its emergence over the past decade and a half as a distinct field within humanitarian work, before moving onto a summary of some of the key findings that came out of her recent fieldwork in Nepal for Mokoro’s evaluation of UNICEF’s contribution to education in humanitarian settings.

Allison demonstrated the necessity of EiE with some stark statistics – only 50% of refugees have access to primary education and 22% to secondary, while just 1% have the chance to attend university. When we consider that the average length of displacement is 17 years, it is clear that to leave education out of efforts to assist those forced from their homes is to deny this basic human right to an entire generation. Because it provides spaces where students can be safe from exploitation, equips them with survival skills, and provides psychosocial support, education saves and sustains lives, and recognition of this has led to the adoption of EiE as an indispensable part of humanitarian response.

Allison went on to describe the EiE response in the aftermath of the devastating earthquakes that hit Nepal in 2015, destroying around 8,000 schools and disrupting education for one million children. She found that humanitarian partners and the Nepalese government had made great progress in aligning education sector policies and plans with national, subnational, and local disaster management plans, building around the three pillars of safe learning facilities, school disaster management, and risk reduction and resilience education. In its mainstreaming of preparedness into the education sector, Nepal represents an example of how EiE can be employed to ‘build back better’ after a disaster, and to put in place a comprehensive plan to enhance resilience and safety in the face of future disasters.

Allison ended with a call to empower children and youth as agents of change and multipliers of knowledge and action. In a future of increased frequency and intensity of disasters brought on by climate change, it is crucial that children are equipped with the knowledge and skills to build resilience to such threats. It was clear from Allison’s talk that building this kind of preparedness is a key facet of EiE practice.

Marie Tamagnan recently came back from eight weeks in Mozambique, where she played a key role in laying the foundations of the EiE component of Save the Children’s response to the devastation caused by Cyclones Idai and Kenneth in spring 2019. Her presentation gave us a detailed example of what an EiE response looks like on the ground, the challenges and opportunities that arise, and how such operations pose questions related to the wider field of EiE.

After two cyclones in quick succession battered Mozambique earlier this year, more than a thousand people were killed, 3,500 classrooms were destroyed, and education was disrupted for 335,000 school-age children. Not only did the country experience a significant loss of education infrastructure, school equipment, school records, and general normality, but many of the classrooms that were left standing were used as shelters by internally displaced people (IDPs), adding a further barrier to students’ return to education. One of Save the Children’s first priorities, then, was to get IDPs housed in purpose-built camps so that the classrooms could be converted back into places of learning. This task was further complicated by the fact that, initially having no office, Marie’s team – and thousands of humanitarian responders like them – were forced to work out of the airport, and were subject to the absence of basic services such as electricity.

Marie explained that the delivery of EiE in Mozambique involved construction of temporary classrooms and rehabilitation of damaged ones, supply of training and incentives to new and returning teachers, distribution of educational materials and emergency curriculums, and provision of psychosocial support to address trauma and promote wellbeing among students and teachers alike. She described the ‘School in a Box’, an easily transportable kit containing all the basic materials needed to get a classroom up and running. Marie also explained that schools can be the centre of a crisis response: once established, a school can function as a centralised site through which other key components of humanitarian response – medicines, shelter, water and sanitation – can be provided. Furthermore, communities tend to value schools, making stakeholder buy-in – the absence of which sets any intervention up to fail – easier to obtain. However, despite these seemingly self-evident benefits of EiE, Marie reminded us that practitioners often have to battle to make it a priority, as many in the humanitarian field at large still do not fully appreciate its worth as a lifesaving and life-sustaining endeavour.

The seminar was attended by people from across the education, humanitarian, and development sectors, and the speakers’ presentations provoked a rich and absorbing discussion in which participants contributed further valuable perspectives from their own diverse backgrounds. It is clear that Education in Emergencies now constitutes an indispensable facet of humanitarian response, and as education is a cornerstone of development, EiE can act as a conduit for the development and humanitarian sectors, which in the context of the Humanitarian-Development Nexus and the New Way of Working makes it a vital sphere of study and practice. However, as some of our speakers made apparent, there remains much advocacy work to be done before it is fully recognized as such.

You can access a video recording of the seminar, as well as the speakers’ presentations here.