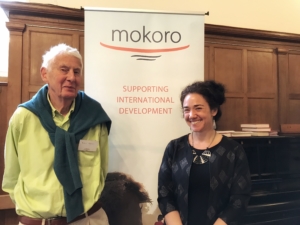 On 1st May 2019, Mokoro welcomed Rachael Knight to Oxford to share some of her experiences and insights gained from 15 years working at the forefront of community land rights. Rachael, an attorney with expertise in land tenure security, access to justice, and legal empowerment of the poor, helped to found Namati, a global legal empowerment organisation helping the disadvantaged to understand, use, and shape the law. Rachael is admired by many at Mokoro for her work defining and defending community land rights across Africa. This admiration is reciprocated by Rachael, who began her presentation by honouring some of Mokoro’s land specialists (Elizabeth Daley, Chris Tanner, and Robin Palmer), all of whom contributed to her passion in land rights when she was a young, keen student. It was therefore a privilege to host this event, bringing together some prominent global advocates for land rights for a passionate and thought provoking presentation, followed by a long and lively discussion that could have continued well into the night. There aren’t many speakers that can hold a room’s concentration for a full hour, but Rachael certainly did.

Rachael’s presentation began by describing her work co-creating a legal empowerment approach to community land protection, and then, in Rachael’s own words, dived into ‘an abyss of cynicism’, looking at global trends and her recent research on the capacity of communities to respond to external threats to their land. Rachael concluded with some thoughts on what policy makers, advocates, bilaterals and multilaterals, funders, and others can do to support communities to defend their land claims and regenerate their local ecosystems.

During Rachael’s early career she wrote a paper on the statutory recognition of customary land rights, exploring the mechanics of land laws in Mozambique, Botswana and Tanzania. Out of this Rachael carried out a multi-year research project in Liberia, Uganda and Mozambique, in partnership with Civil Society Organisations (CSOs) in each county. They looked at what it takes to get these laws implemented and how to get communities to do it. On the advisory panel of this research was Vivek Maru, who was leaving his role at the World Bank to found Namati. Together they formed a Community Land Protection Programme at Namati, a highly innovative programme, which evolved based on lesson learning along the way and expanded into more and more countries. Over time they realised that education of communities, including helping them to follow national legal processes to formalise their rights, had to be done with an equal share of expertise between the field staff and the communities themselves. For the programme field officers, this involved undoing the colonial mentality of ‘I’m the expert’ and co-designing with the communities, understanding from them what is needed and what the best solutions are.

A five-step process was innovated for the Community Land Protection Programme:

Rachael went on to outline some of the approaches used in these steps to engage the community. For example, the programme created a really straightforward evaluation process to enable communities to understand the market value of their resources. This involved getting the community to name everything they could get from their environment, for example a forest. One community listed over 60 items that they could get from their forests, including firewood, timber for housing, and fruits. The communities would then discuss what the value would be for each of these goods if they had to buy them from the market rather than taking them from the forest. Every community that this tool was used with would calculate that they obtained over USD 1 million of resources from their forests every year. Hence, when the community were asked if they would accept USD 20,000 in rent for their forest every year, the resounding response was always ‘no way!’. The communities were really able to understand the market value of their resources and through this were motivated to fight for these rights. This was just one of a few innovative approaches that the programme adopted through their openness to learning and adapting along the way, and illustrated many positive benefits of the programme to the communities.

Rachael next described her recent work testing whether, with improved knowledge on their rights, communities were able to protect their land rights.[2] Rachael and her team went back to Uganda, Liberia and Mozambique where work was conducted from 2009 to 2015.  They telephoned a sample of 61 communities and asked them if they had been approached by an external investor or government seeking land. If they said yes, they had been approached by investors, they were asked if the team could visit the village to carry out further interviews and to find out what had really happened. 46% of the 61 communities had been approached by investors. Within these communities, 34% of the approaches were by government officials seeking land for government projects; 26% were national/regional elites looking for investment projects; and 40% were international investors seeking land for investment.

The research has shown that land documentation and legal empowerment have not been sufficient to balance power information asymmetries between rural communities and investors backed by government officials. Even the communities who were most legally empowered were no match for state power and the threat of violence behind that power. Rachael gave various anecdotes from communities that illustrated the ability of government officials to leverage their power of influence to override citizen’s land rights and to claim land that was owned by villagers for investment projects without paying any compensation. These outcomes were prevalent even though communities knew their rights, and also regardless of whether or not they had de jure legal ownership, or had a formal government document, or had fought against the land grab, or whether or not they had sought external support from NGOs and legal representatives. In only 11 of the 35 instances followed up on by the study did the community refuse the requests from investors and ask for benefits, compensation, or environmental protections, or seek external help.  This illustrates that you have to be brave to say ‘no’. In the other 24 instances, where the community did share land, none of the communities received a memorandum of understanding or a contract.

To bring the mood in the room back up, Rachael moved on to discuss what the global community can do to support communities to defend their land rights. The following suggestions were put to the audience:

The presentation closed with some reflections on the intersection of spirituality and land rights. Rachael argued that as long as people look at a tree and think of timber, or a mountain and think of iron ore, we are always going to have struggles over land and natural resources. In her view, there needs to be a shift to seeing resources not as resources, but as entities with a spiritual connection. Although these thoughts were perhaps a little left-field for some of the audience, there was a consensus in the discussion that followed on the need for a fundamental change, shifting away from our western consumerist mentality towards land and natural resources, especially as we grapple with worrying trends in global warming.

Robin Palmer has also written a short piece on his delight at bringing Rachael to speak at a Mokoro seminar. You can view this here.

[1] This fifth step did not take place in many of the communities.

[2] The report from this research is available here.