“It’s hard to find the right life partner in my soum (district). Most of the girls went to school, then to university in the city. Not many of them are good at herding.”

Like most young women who grew up in the city, I usually think of herders as quiet men with closed faces that are wrinkled and burnt by the sun. Khuukhenduu Naranbold is quite the opposite. He is smooth-skinned with an open face and a big smile. Even though he is only 23 years old, he is self-confident and keen to talk.

Khuukhenduu’s comments about marriage and herding were recorded in 2016 at the beginning of a five-year action research project on women’s land tenure security, called WOLTS. The project has focused on pastoralist communities affected by mining, and has involved repeated visits and evidence gathering in several communities in Mongolia and Tanzania. I have been a part of the WOLTS team since June 2016. 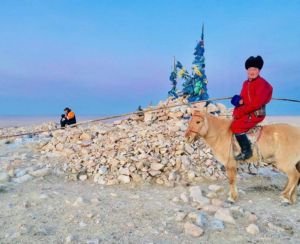 Khuukhenduu comes from Dalanjargalan in the Gobi Desert – an area of Mongolia where the traditional herding lifestyle is under threat, not only from mining but also because many young herder men are struggling to marry. This is because boys, especially in herding families, are expected to look after the family’s animals, while girls are more likely to finish school and go to university. Once the girls leave to study in the city, few want to return to the harsh herding lifestyle.

Although it is difficult to find a partner, Khuukhenduu is not unhappy. He is a keen horseman and very proud of his riding skills. He is a member of the Mongolian Federation of Horse Racing and Trainers, and he loves racing. Unlike most other herders, who have adopted Chinese motorcycles and modern clothes, he still herds his animals on horseback and often wears a beautiful red deel (traditional costume).

However the nomadic herding life is difficult, and, although he lives in his own ger (traditional felted tent), Khuukhenduu stays close to his parents so that taking care of animals can be shared. At the same time, he uses social media to keep in touch with his school friends – and with girls.

This contrast between tradition and modern technology illustrates the tensions and rapid changes taking place in today’s herding lifestyle. Khuukhenduu has profound knowledge of nature and how to successfully make a living from the land. He also embraces the internet, and was an eager participant in our WOLTS training programme this year on gender, land rights and the law.

In his small community in Dalanjargalan, Khuukhenduu is already well known. Although he does not have high academic qualifications, he is a skilled manager who knows how to maintain pastureland and raise quality livestock. He is also a confident speaker and a natural leader, so it is not surprising that older participants in the WOLTS programme selected him to become a community champion on gender and land. In some ways in his everyday life he is just like a CEO – taking responsibility, always having to think about the future and plan for both the good times and the bad, while constantly carrying out a whole range of highly skilled herding activities.

Mongolian masculinity is celebrated in July every year in the Naadam festival of the three ‘manly sports’ of horse riding, wrestling and archery. Khuukhenduu is a participant and fierce competitor in Naadam games – especially horse racing. But his skills, grounded in the country’s herding traditions, will be lost unless the country and the government support nomadic families to thrive.

I often worry that our country does not put sufficient value on the traditional knowledge and skills of herding people. If the herders go, Mongolia will lose centuries of experience in sustainable land and animal management. If Khuukhenduu struggles to marry and raise a family, what hope is there for other young herders?

The herding life is not for everyone, but I know that city life also has its problems. I also realise that knowledge often comes from life’s experiences, not only from books and university. As Mongolia looks for ways to develop new industries we need to remember our proud nomadic heritage and make sure we protect herders’ land rights, not only to support tourism but – most importantly – as the foundation for so many Mongolian families’ lives. As trained and respected community champions, thoughtful young leaders like Khuukhenduu are the very people who offer us hope for the future.

Suvd Boldbaatar works with the Mongolian NGO, People Centered Conservation (PCC). She is a key field team
member for the global WOLTS project, which is carried out in Mongolia by PCC with MokoroLtd, a UK-based not-for profit organisation.