Ethiopia WIDE: The trajectory of a research project 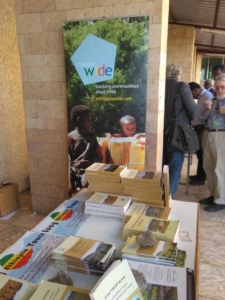 The WIDE stall at the International Conference of Ethiopian Studies 2018

Ethiopia WIDE has been part of Mokoro’s life since 2009, almost a decade now. As a research project ‘tracking communities since 1994’, WIDE will celebrate its 25th birthday in 2019.  Its origins and first two incarnations were in academic research.  In 1994 researchers from Addis Ababa and Oxford Universities selected a number of sites in Amhara, Oromia, Southern Nations, Nationalities and Peoples, and Tigray regions, as exemplars of different types of rural communities in Ethiopia representing wide variations in a range of key parameters (livelihoods, remoteness or ease of access, religious and ethnic composition, etc.). Alula Pankhurst, an anthropologist teaching at Addis Ababa University, and Pip Bevan, a sociologist then working at Oxford University, led the first round of qualitative, social sciences-grounded, community-focused research in a bid to understand what these communities looked like and how they ‘worked’ as rural societies. A second ‘datapoint’ was made possible in 2002/3 as part of another academic research project looking at wellbeing and illbeing in rural areas. At that time, Alula and Pip (who had moved to Bath University) led teams of research officers who returned to the same communities, which gave them the opportunity, among other things, to look at how they had changed over the previous seven to eight years.

The idea of continuing to track these trajectories of change and of understanding how and why they differed among communities and for different people living in them arose in 2009. That was when I teamed up with Alula and Pip, after ten years of involvement in Ethiopia as a consultant and as I became increasingly irritated by my still ‘superficial’ understanding of the country: as a ‘Jack of no trade’ when it comes to academic discipline, I was nonetheless convinced that the kind of qualitative, case-based, longitudinal, cross-sectoral, micro-level understanding that WIDE generates was relevant to policy-making and practice, and that it could usefully complement the more readily available quantitative and/or sector-bound measures of change.  In 2010, Alula, Pip and I managed to convince a few of the development partners of the Ethiopian government to fund what we called WIDE3 (following WIDE1 in 1994 and WIDE2 in 2002/3) as an academically rigorous, policy-relevant qualitative longitudinal research project.  We completed a third round of fieldwork in all twenty WIDE communities between 2010 and 2013.

Then followed a phase in which we set out to exploit the mass of data which was at hand, and share the findings from it and what we saw as possible policy implications with different groups of stakeholders, mainly in Ethiopia. This entailed numerous presentations at meetings, seminars and workshops, and two rounds of ‘discussion briefs’ presented and discussed at high level in the Government of Ethiopia, followed by a range of publications. First came the ‘WIDE3 book’, published in Addis Ababa and now available internationally as a Tsehai publication under the title ‘Changing Rural Ethiopia: Community Transformations’. In a bid to make the research widely available to local audiences we also compiled the discussion briefs, translated them into Amharic, and published shorter booklets in both English and Amharic, under the title ‘Twenty Rural Communities in Ethiopia: Selected discussion briefs on change and transformation’. In line with this commitment, more reports and data are also available at www.ethiopiawide.net.

Over the years, WIDE became known by a circle of stakeholders, small but including a few senior people, as a useful source of ‘stories behind the numbers’: research that tries to understand why numbers are what they are and documents the tremendous diversity in development outcomes which lies behind statistical average – in turn, calling for recognition that ‘one size does not fit all’.

Following the launch of the WIDE3 book in February 2017, and with encouragement from a number of Ethiopian and other ‘WIDE friends’, the team began to think about the future of WIDE. The result was a short WIDE Bridge phase which started in January 2018 with two aims. First, to conduct new fieldwork in four communities, one  each in Amhara, Oromia, SNNP and Tigray Regions, to continue building understanding of changes in rural Ethiopia in a period of ongoing rapid transformation; second, with a view to ensuring that findings from this longitudinal, qualitative, cross-sectoral, community-focused research continue to be available in the longer term, to engage in a process of institutionalising WIDE within interested Ethiopian research- and policy-oriented institutions. By early 2018 the WIDE core team had also expanded, with Sarah Vaughan (political scientist affiliated to Edinburgh University) as a senior member, and Mulugeta Gashaw and Agata Frankowska as research fellows, whilst continuing to rely on the administrative and logistical support of Pankhurst Development Research and Consultancy (PDRC) and the management skills of Agazi Tiumelissan.

Between January and March 2018, we completed fieldwork in the four Bridge communities. Since then we have been working on a number of papers using the new data and the data generated in earlier WIDE phases.  October was a very busy month. The team organised a panel called ‘Globalisation and Rural Ethiopia’ at the 20th International Conference of Ethiopian Studies in Mekelle (1-5 October 2018) with fourteen papers; members of the WIDE team prepared and presented twelve of these, based on the WIDE Bridge data and reflecting on how various aspects of globalisation interacted with rural societies in a range of areas such as livelihood diversification, migration, the youth and ‘global cultures’ etc. The papers are being revised for journal submission. On 31st October we also presented to a circle of senior government officials and academics draft versions of seven policy-oriented discussion briefs, on land and the rising pressure of urbanisation, modernisation of smallholder farming and the growing importance of the rural nonfarm sector, young people’s economic experiences, rural modernisation and increasing inequalities, selected aspects of social protection, and local governance; we are in the process of finalising them following receipt of comments. In keeping with our earlier practice, these briefs will be available on our website. We are also very happy that this time we will be able to further deepen and expand our policy engagement efforts: in the first quarter of 2019 this new series of discussion briefs will be compiled and published in English and Amharic. For the first time, we will also organise regional launches, as well as a series of radio and TV programmes and newspaper articles both on these Bridge briefs and on earlier WIDE products. We will work on them with the Forum for Social Studies, an Addis-based think tank most experienced in media communications (more on them below).

The Bridge phase has proven to be in keeping with the serendipity of the whole WIDE story. When we started in January 2018, we could not imagine that our fieldwork in January-March 2018 would represent what turned out to be a quite special form of ‘baseline’ as it was conducted just a couple of weeks before the start of the ongoing transformation of the whole political and societal scene in Ethiopia. Our briefs, on highly topical subjects, can feed into the thinking of the new administrations set up in October 2018, at a time when there is a sense that policy-making is becoming more open. The coming weeks and months offer the possibility of influencing new and young Ministers and State Ministers at federal level, and in regional administrations in which we do have a few champions.  Whilst this is all very recent, we have started building links which could prove to be key, for instance with the new Planning and Development Commissioner; she is one of the energetic, highly qualified women that Prime Minister Abiy Ahmed has appointed as part of a group of women smashing Ethiopia’s glass ceiling, including those in a fully gender-balanced Cabinet.

And to end the story for now, another exciting development. All along the WIDE Bridge phase, bearing in mind our objective of finding an Ethiopian home (or several) for WIDE, we have developed solid links with four federal universities, located one in each of the four regions in which WIDE communities are found, and a highly reputable Ethiopian research/policy-oriented think tank at federal level. Ambo University, Bahr Dar University, Hawassa University, Mekelle University and the Forum for Social Studies have all been involved in some of the WIDE Bridge writing or events. They have all expressed strong interest at senior leadership level in being involved as full partners in WIDE4, with a view to taking the research forward over the longer term. On this basis we are now developing a concept note for WIDE4. Funding still needs to be secured but we hope the project will start in early 2019, in an exciting new form in which all partners will jointly design the research approach and questions, university teams will take responsibility for the fieldwork and completion of the WIDE4 qualitative database under the guidance of the WIDE team, and we will jointly develop the products to disseminate the WIDE4 findings for policy-making and for academic audiences in Ethiopia and beyond.