As a Swahili speaker from Tanzania, I have not often had the opportunity to meet or work with people from remote Maasai communities. However, I recently visited the villages of Naisinyai and Mundarara in the north of the country as part of a global research project on women’s land rights in pastoral communities affected by mining (the WOLTS project).

When we first arrived, it was clear that these were still very traditional communities. The Maasai are herders where men are the heads of the family. Polygamy is common; women are regarded as the property of their husbands and traditionally have no rights to own land, livestock, money or any other property. They are not allowed to argue with men, who are the main decision-makers from community to family level. The communities practice an age-set system, with each age group having specific roles.

I wondered whether we had any chance of changing these communities’ practices on women’s land rights, and especially of changing the views of the men. We held a series of community meetings that started to open up the issues, but it was only when the men had to step into the shoes of women that we learned some remarkable things.

Part of our work in both Naisinyai and Mundarara involved role-playing. Participants in our project’s training programme were asked to act out the story of a widowed woman who was being denied ownership of her deceased husband’s land – the only land in the family.

Women were asked to play all the parts first, and then the men were. At first the Maasai men did not want to take part – it seemed too childish and shameful for them to act in front of women. After some persuading by our facilitators, they agreed.

What the role-plays showed was truly eye-opening. We watched with the women as the traditional leaders and other men acted out what really happens when they are dealing with women’s land issues. They showed just how easily women lose their land to men, regardless of their legal rights. They even played, very convincingly, the roles of women, speaking in a humble way, as Maasai women normally do when talking to men. They were able to convey women’s sorrow and pain as the husband’s brother tried to confiscate the widow’s land.

Many of the women were happy to see that the men could understand and play-act the disappointment that women feel when their land is taken and given to someone else. In Maasai they said “woooi, nija, esipa-pi,” meaning “it is exactly what Maasai women are passing through.” 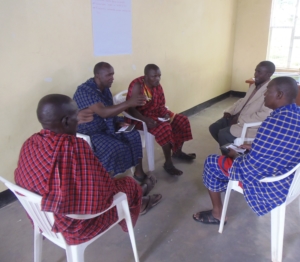 What the role-plays achieved was to bridge the communications gap between women and men. Women have seen what happens inside the closed world of Maasai men and it has emboldened them. They now speak more directly to community leaders about their rights, and seem to be heard by them. Male leaders are also being more open about women’s land rights, and are reported to now be more likely to defend them. They clearly know that women suffer in these situations and realise it is not right

The next challenge is to make these changes sustainable. For this to happen, there is a need to engage more traditional leaders in future training on women’s land rights. By standing in women’s shoes and seeing the world through their eyes, I believe their attitudes will change. Through this kind of continued engagement, I can start to envisage many more communities that respect and protect women’s property rights, including their rights to own land.

Emmanuel Mbise works with the Tanzanian NGO, HakiMadini. He provides in-field logistics and transport to the global WOLTS project, which is carried out in Tanzania by HakiMadini with Mokoro Ltd, a UK-based not-for-profit organisation.