Being a man on a gender project

Some insights from the field

I joined the WOLTS project team in November 2015 and in January 2017 I took part in participatory fieldwork in our two pilot communities in Tanzania. I met Ezekiel Kereri at this time, a fellow WOLTS team member and young Maasai man who has supported the Tanzania fieldwork for the past year. Here I describe our experiences of working on this exciting project and our insights, as men, carrying out fieldwork on gender, mining, pastoralism and land.

The dynamics of being a male researcher working on a gender project did not occupy my mind during our fieldwork – it was only something that I began to think about once back in the UK. It occurred to me that we were in a more privileged position than I had appreciated, and that Ezekiel and I had responsibilities during the fieldwork that we had not recognised at the time.

The first example of this was with respect to how younger Maasai men and women interacted with us, especially with Ezekiel. They would ask him questions relating to his own upbringing and about differences with the Maasai traditions and cultural norms that they followed, such as: Do women own land in Ezekiel’s home village in Loliondo? What different household tasks do men and women do there? What roles do men have and what roles do women have?

I also received questions about life in the UK, as well as about my age and whether I was married. When I replied “no”, the young Maasai men and women would ask with puzzlement why, at 24, I did not have at least one wife.

The significance of these interactions is that it highlights the fascination younger people have concerning alternative social norms and differing ways of life, which I would argue occurs globally. Their questioning, and perhaps disillusionment with current customary practices in their own communities, offers a window in which social norms can be influenced to become more inclusive and an opportunity to support more gender-equitable land governance.

This idea is best described by Alice Clarfelt in her study of perspectives of gender inequality in South Africa: “Listening to the voice of youth provides a hopeful perspective of young people’s ability to critically reflect on their roles as men and women, and to be agents of change towards a more gender equitable society”.

In comparison, older participants in our research expressed their firm belief that current customary practices had been crafted over generations and have always worked for Maasai communities. They complained that the youth undermine this social fabric by continuing to disrespect their elders. This is not confined to ignoring their advice but can be in the form of men undertaking jobs traditionally associated with women, such as fetching water and firewood, which from an outside perspective is a positive change.

This is what makes me think that Ezekiel and I, intentionally or otherwise, will have had an impact particularly on the younger men of the two communities, by demonstrating that other definitions exist of what it is to be a man.

The young Maasai men and women we spoke with seemed to be visibly looking for alternative social narratives that conflicted with established norms, for example that men must manage all the financial pressures on their family or that a woman must never disrespect her husband by applying for her own land.

This offers a sense of responsibility that excites me but also inspires caution, because an injection of more liberal attitudes can be destabilising in communities that still uphold these kind of conservative views in practice.

A second example that illustrates both our positions of privilege and responsibility as male researchers during the WOLTS fieldwork relates to the very sensitive nature of some of the issues that came up. One of these concerned the epidemic of violence that has accompanied the growth of small-, medium- and large-scale mining in the two communities.

Participants in our focus group discussions described how the daily journey of taking livestock to pasture had become a very perilous one, as unemployed and drug-intoxicated miners would beat and rape defenceless individuals. Victims included widowed grandmothers, pregnant women and young boys – yet little was being done to protect them from these effects of the mining industry having become so closely intertwined with village life.

Another sensitive issue was that of institutionalised violence against marginalised groups. This relates to local customary practices that permitted (and advocated for) the disempowerment of women, especially. For example, girls were being married off to much older men against their will and suffering regular physical and mental abuse perpetrated by men against their wives.

It did not make easy listening, but it was nonetheless a rare privilege for myself and Ezekiel personally, as men, as well as for the rest of our field team, to be trusted to bear witness to people’s pain. The violence that affected many women (and some boys and men) in their daily lives was not something they decided to hide from us. Instead, people talked about it openly during our research.

What was most powerful was how they spoke without transmitting any emotion, as if the crimes being perpetrated against so many vulnerable people in the community were just accepted as part of ordinary life.

These traumatic topics were rarely spoken about publicly in the wider community, but when they were, it was between affected women – and not as regular items on the agenda of village meetings. It would be fair to assume, therefore, that as male researchers, Ezekiel and I were the first men to hear some of these accounts spoken out loud, and with such clarity and openness.

As we listened, I could not help but be aware of the significance of women speaking about gender-based violence to me, a man. Perhaps this was not a concern for any of the women, if they just wanted to have their stories heard. Perhaps their opinion of me was based not on my gender but more on my standing as a foreigner – and for Ezekiel, on his standing as an outsider.

However, the experience made me feel extremely privileged to be the person they trusted to speak to and because through our fieldwork we helped to create a space for them to do so – because we wanted to learn about their lives. The emotional bravery demonstrated by some of these women in reliving their harrowing experiences was matched only by their courage in speaking out in our focus group discussions against the perpetrators of violence, some of whom still lived in the community and even in their families.

As we move on to a new stage of WOLTS fieldwork in these same communities we are now more aware of our positions of responsibility as young men working on a gender project. We will aim to keep providing a safe and trusting environment for participants in our research to share the most private of experiences, if they so wish. And it will be our privilege to interact further with the younger Maasai and support their desire for positive change to become a reality.

1. Clarfelt, A. (2015). Struggling to be a real man: Young people’s perspectives of gender inequality and gender-based violence. [online] restlessdevelopment.org. At: http://restlessdevelopment.org/news/2015/01/02/boys-don-t-cry-how-sexual-based-violence-affects-young-men-in-south-africa [Accessed 4 Jan. 2018] 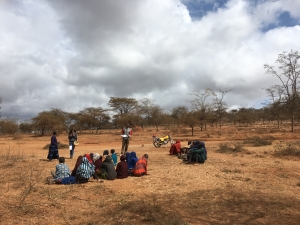