In December of last year, Paris hosted the 21st United Nations Climate Change Conference, which saw the first ever global commitment to cut greenhouse gas emissions. The historic agreement requires developed and developing nations to limit their emissions so that global average temperatures do not exceed a two degree increase over pre-industrial levels. Beyond this two degree increase, climate scientists warn that droughts, floods and the rise in sea levels will have catastrophic and irreversible effects.

The agreement has been praised by world leaders including President Obama who identified it as “a turning point for the world”. However, the Paris agreement presents huge challenges for developed and developing countries to contend with over the coming decades, most significant of which is adapting to climate change in the short to medium term. The Paris agreement therefore calls for developed countries to show greater commitment to the target of providing developing countries with $100 billion climate finance per year from 2020. The justification for this funding is that developing countries stand to suffer the most acutely from climate change despite only contributing a small fraction of global emissions. It is hoped that this funding will not only protect poor countries from the effects of climate change but also support development that bypasses fossil fuel based growth.

Climate resilience is often described with reference to adaptation. However, there is an important distinction to be made between the two. Adaptation is usually perceived to be a coping mechanism associated with climate change, whereby a vulnerable population pursue actions and policies which directly improve their ability to reduce the damaging effects of current and predicted climatic events. By contrast, climate resilience is often considered to be a broader developmental approach which encourages communities to pursue new livelihood options which are more resistant to climate shocks and have the ability to recover more quickly to pre-shock levels.

Mokoro principal consultant Stephen Turner chaired the seminar and began by outlining Mokoro’s recent work on climate resilience, which has predominantly been with the World Food Programme. Evaluations of WFP country portfolios reflect the organisation’s transition towards broader development thinking from its earlier focus on food shortages associated with one-off events such as conflict, famine and drought. WFP has put greater emphasis on vulnerability and understanding how livelihoods function, reflecting its move towards programmes that strengthen climate resilience.

The seminar featured three speakers. Stephen Anderson from the Food Economy Group (FEG) began by giving an overview of what climate resilience is and how it features in donor and government policy. Mark Lawrence, also from FEG, then spoke about the use of the ‘Household Economy Analysis’ method to determine climate resilience – a model used to assess a household’s ability to cope with and recover from potential hazards. Finally, Mokoro principal consultant Kit Nicholson discussed climate change projections from an economic perspective, including the changes in policy design and implementation that are implied by them.

Stephen Anderson, a specialist in food security and livelihoods, explained that resilience has been a feature of development policy for a number of decades through social protection and poverty reduction strategies. It is a term which has been repeatedly deployed in policy and repackaged in various forms, thus making it highly ambiguous. Donors such as DFID, the EU and USAID describe resilience as a flexible, multi-sectoral, pre-emptive approach that strengthens local capacities to improve crisis prevention, preparedness and responses. Stephen argued that single-sector approaches to climate resilience are never sufficient and that resilience requires multiple agencies in the developmental and emergency fields to integrate their operations. An integrated approach creates a safety net for managing risk, access to reliable social services, and access to productive support and services. 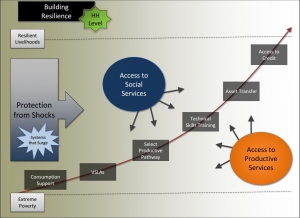 Figure 1: A graph which maps out the stages of resilience building from a household in extreme poverty to one that secures resilient livelihoods.

Stephen concluded by arguing that resilience programmes are most likely to succeed when there is strong leadership in place with a clear drive from top to bottom, where agencieslead with engagement, not tools, and where there is a system which measures results effectively by developing an understanding of the local socioeconomics. It is the last of these points that became the basis of the seminar.

Measuring climate change resilience is vital to governments and development agencies as it allows them to make hazard impact projections and indicate where vulnerabilities exist in socioeconomic networks. From this, more effective policy can be designed and implemented to reduce the severity of shocks and strengthen the capacity of communities to recover. One approach used to measure resilience is Household Economy Analysis (HEA), which Mark Lawrence has worked on for over 20 years. HEA works by combining a household’s annual food consumption with its annual income expressed in terms of calories (by calculating how much food can be bought with this income in a local context). The total income therefore demonstrates to what degree a household is meeting its annual minimum food needs as a percentage. Using this figure as a reference point, projections can then be made about potential hazards and the effects these have on a household’s income. The next step of the analysis is to determine how a household copes with a specific hazard.

The objective of HEA is ensuring that livelihoods can withstand and recover from shocks. Households that are not resilient lose a greater amount of income in shock years and recover more slowly. By calculating a household resilience score HEA can determine the effectiveness of a project in limiting total income loss triggered by a shock and accelerating recovery back to pre-shock levels. Mark argued that the most effective projects are those that generate additional income under hazard conditions (e.g. drought resistant crops) without undermining income from pre-project sources.

Our final speaker, Kit Nicholson, brought the discussion back to the context of climate change and how climate resilience strategies could be justified by their economic benefits. Climatologists estimate that floods and droughts are going to become twice as frequent in tropical regions by 2050; it therefore stands to reason that resilience projects are going to become twice as valuable over the same period. Climate studies predict that the increasing frequency of these events will have a severe impact on GDP for the countries affected. Accumulated losses in GDP by 2050 may represent a total loss of up to 40% compared to the expected level of GDP without climate change. This is therefore a huge incentive for countries to adopt climate resilience strategies; however, there remains a reluctance to do so. To counteract this reluctance and ensure that the annual target of $100 billion of climate finance is met and spent explicitly on climate related programmes, the OECD DAC has introduced guidelines to help measure climate funding. If a programme’s priority focus is climate change then it has high relevance, and similarly if addressing climate change issues is only a minor objective within a programme it has low relevance. This scoring is highly subjective, however, and still does not accurately portray how much is being spent to combat the effects of climate change. Kit advised that going forward climate change should be more heavily integrated into the programme design and appraisal process, especially within government programmes.

A lively discussion followed the three talks including a particular focus on the practicalities and limitations of Household Economy Analysis. The HEA model is far from simple but has the ability to be a highly useful comparative tool due to its design. However, some participants criticised the model’s inability to cover more social aspects of livelihoods such as internal inequalities and how shocks can affect family members differently. For example, gender inequalities can often be exacerbated during shocks but the HEA model is unable to pick up on this. Mark noted that whilst a model that could pick up on internal dynamics would be ideal, it would compromise the scale on which the HEA is being used – as of July 2016, 88 baselines for 501 livelihood zones (the vast majority in Africa) had been mapped out, offering policy makers huge amounts of useful information about regional vulnerabilities and degrees of resilience.