“A woman has long hair but a short brain”

Reflections on an old Mongolian saying

At a recent gender training session in Mongolia, a middle-aged man used the old Mongolian saying that “a woman has long hair and a short brain” when we asked participants to name some of the main characteristics of women and men. I was glad that he was corrected by a much older man, who pointed out that the saying relates to traditional gender roles that are already very different from what they were just a few years ago.

In the demanding world of today, many Mongolian women are in fact doing better than men in terms of their education and work. Arnaud Soirat from Rio Tinto made similar comments during a recent conference organised by the World Bank, when he described Mongolia as a best practice example when it comes to women’s involvement in mining.

In the herder society of Mongolia, the traditional division of labour in the household is for a man to be a herder and doing outside work (which means all tasks relating to herding livestock and seasonally moving with them) and for a woman to be inside the home (or Ger, traditional Yurt) and doing all the housework. This traditional norm about men and women’s roles in herder households has arisen as a way to adapt to living in the extreme weather conditions of our country.

As Mongolia became more open to the rest of the world since 1990, with the transition from socialism to a democracy and market economy, parents started to adapt to the new way of life by making their sons (or at least one of the boys) stay at home to herd the family’s livestock and sending their daughters to school for higher education.

In fact, our recent WOLTS research has confirmed this phenomenon. We found that women were generally more highly educated than men in the households we surveyed. So I was really interested to see that education was highlighted during the World Bank’s recent conference as being important to achieving gender equality in the mining sector.

However, I believe what is actually more important is ensuring a decent education for both women and men.

To give you just one example of why – during our WOLTS research, we interviewed one lady who had earned her Bachelor’s Degree and then gone back to her home area (soum) and settled with a herder man. As one of the few educated women in her soum, she has been an active member of the community and taken up different roles.

The saddest part though, her husband had treated her badly, often leaving her alone for many days and sometimes getting violent after drinking a lot of alcohol. Somehow, this woman’s husband could not appreciate that she had become more respected in the community, and rather he thought that she was too outspoken.

Because of cases like this in herding and mining communities across Mongolia, I was very happy to see a session on “Engaging Men and Boys” at the World Bank conference on Gender and Oil, Gas and Mining. Luckily my WOLTS colleague Jim Grabham was at the conference with me – he’s written a blog about being a man on a gender project so he really engaged with that session! 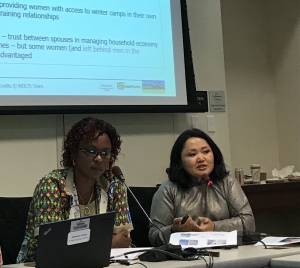 I was really pleased to take part as a Panelist in the session on “Livelihoods Opportunities and Impacts” and to learn that the Conference organisers had included my presentation about our WOLTS research as a way of building a holistic approach, to have land rights experts taking part in this largely mining sector event. After all, Gender brought us together.