Reflections from time in The Gambia

In a discussion on the limitations of institutional reform in developing countries and why many reforms have failed to bring about desired change, Matt Andrews refers to the ‘invisible norms’ and ‘cultural cognitive and normative mechanisms’ that form the foundations for the new ‘rules of the game’. He argues that many reforms do not look at these invisible rules and, by likening such reforms to icebergs, highlights that they are likely to fail, because the bulk supporting the tip of the iceberg has neither been understood nor addressed. Having spent nearly two years living and working in The Gambia, I have certainly come to appreciate this argument and the need for reform to take place across cultural as well as judicial and political institutions.

My personal interest in development lies in considering institutional (including cultural) reform that leads to more gender-egalitarian policy as well as practice. In this connection, my work in The Gambia with Tostan, an organisation that aims to bring about positive social change and which endeavours to empower women through information-sharing, processes of dialogue and the encouragement of internally-led transformative social action to become leaders of their own development, was defining. During my time in The Gambia, I observed a clear disconnect between policy and practice, driven largely by persistent and deeply-held customs, traditions and beliefs that often relegate women to a position subordinate to men. I spent the majority of my time in the east of the country, the Upper River Region (URR) where Tostan concentrates its activities.

The Gambia shows an ostensible commitment to the equal treatment of women. In the political discourse there are no legal limitations on women’s inclusion in all areas of social, economic and political life, with the revised constitution of 1997 stating that women should be granted the same opportunities as men in every sphere of engagement (Articles 28.1 and 28.2). The Gambian government signed and ratified the Convention on the Elimination of all forms of Discrimination Against Women (CEDAW) in 1992, without reservation, and over 30 years ago established a National Women’s Council Act (NWCA) and a Women’s Bureau to advise government on women’s affairs. Furthermore, the Women’s Act – designed to implement the legal provisions of the NWCA – was introduced in 2010. There has been an effort to empower women politically. However, although the vice-president is a woman, female representation in the National Assembly stands at only 7.5% (as of 2011). 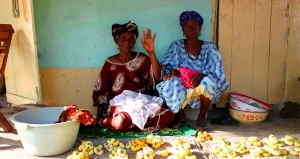 Women selling their produce at a local market in the URR.

Although the government has made changes to the education policy in a bid to encourage female attendance in primary and secondary education, by subsidising school fees for girls, attendance remains very low. Across the country, the literacy rate for women is 58% compared to the rate for men of 70%. This disparity is even more pronounced in the URR, where the female literacy rate is just 13.2%. In this region, there are high rates of early/forced marriage with 10.1% of women/girls reporting to have married under the age of 15 and 70.4% under the age of 18. This goes against provisions in the constitution which state that marriage rights shall be afforded to men and women of full age and shall be ‘based on free and full consent of the intended parties’ (Articles 27.1 and 27.2). Whilst the reasons for low school enrolment and early/forced marriage are multifaceted, and driven in part by economic considerations (with the proportion of people living below the international poverty line recorded at 60%), they are also borne out of persistent beliefs about the appropriate occupation for girls. For reasons both reinforcing and emerging from these beliefs and linked intrinsically with women’s perceived social acceptability, there is also widespread practice of female genital cutting (FGC), with a recorded prevalence in the URR of 71.5% compared to the national average of 42.4%. And, of course, there are examples of gendered divisions in the economic sphere, with women typically occupying unpaid positions predominantly in the agricultural sector, where they comprise 66% of the work force.

In other words, many of the reforms related to gender-egalitarian change that have occurred in The Gambia have taken place at the tip of the iceberg, without the invisible, supporting changes at the bulk – to use the analogy. This is highlighted by figures indicating that across the country a staggering 80% of women consider it justifiable for a man to beat his wife/partner for reasons such as going out without permission (78.6% in URR), or for arguing (62.3% in URR) (see the MICS report), a troubling indication of the persistence of attitudes which sustain behaviours that are the object of reforms. Furthermore, interpretations of Islam which reinforce patriarchy have certainly played a role in determining the standards of appropriateness for women/girls in The Gambia, and the significance of a 90% Muslim population in a highly inter-connected country with a small population of 1.8 million is profound. Within the revised constitution there is also provision for the continued observance of customary and Sharia law, with Sharia law governing issues surrounding marriage, divorce and inheritance and typically affording women limited autonomy and restricted access to benefits and resources. This is particularly apparent in the laws governing inheritance, which favour males over females and afford women the right to inherit only 50% of land should their father die with no sons.

During my time working in the URR, I came into contact with many women and men who – through learning about rights and democracy, and about the potential negative health consequences linked with early pregnancy and FGC (amongst other things) – are beginning to do things differently and to redefine the informal ‘rules of the game’. Groups of men and women – whole communities – have come together both to affirm their commitment to working towards equality and to declare their abandonment of practices including early/forced marriage and FGC. Dialogue and exchange have encouraged communities and individuals to explore the rationale behind practices that were previously accepted without question. The changes have, therefore, been defined by ‘standards of appropriateness’ relevant to the particular context in which they have been envisaged. Whilst this underpins the very value of the changes that are occurring as a result of the Tostan programme, it is something I found surprising on occasions. I remember having to reconsider my view of the intrinsic value and appeal of human rights when the reason for abandoning FGC was explained in very different terms to me by one community member: ‘FGC makes no sense anymore because it can lead to the breakdown of marriages between men and women, which brings shame’. Whilst I was in The Gambia, I witnessed a total of 117 communities from across the URR making a public declaration, highlighting the very real shift that is occurring as a result of this process of change. The process I observed was, indeed, ‘bottom-up’ and – for a complex issue such as FGC – marks only the first step in a generational process of bringing about lasting change. However, the ramifications are significant – not least because existing formal structures in The Gambia allow for women’s inclusion in political, economic and social realms (albeit with the provision of observing customary law) but also because the process has mobilised a body of ‘change agents’. These ‘change agents’ are engaging government officials and local authorities in discussions as well as reaching out to communities in other regions of the country to share knowledge. In doing so and in accordance with theories of norm change, they are effectively acting as ‘norm entrepreneurs’. The small size of The Gambia and the strong links between communities, families and ethnic groups, as well as the relatively small population of individual communities (often consisting of just a few hundred people) make this kind of change possible within a relatively short period, given the cascade effect through which new beliefs, values and ideas are passed down through a closely connected network.

Because of this, I was very interested to read about a research project recently launched by UNRISD entitled, ‘When and Why Do States Respond to Women’s Claims?’ Focusing on India, China and Indonesia, it will seek to understand the how, when and why questions related to gender-egalitarian policy change, as well as to understand the reasons why certain gender issues have gained policy traction whilst others have been left off the agenda. Focusing broadly on policy change in relation to bodily integrity and economic and social rights – issues that have been the focus of significant global advocacy in recent years – the project will also explore two less visible gender-related issues, namely care work and land and inheritance rights. Not only is this research of significant personal interest, but it also comes at an important juncture as we prepare for the post-2015 development agenda and reflect on progress made to date in achieving the Millennium Development Goals (MDGs). Whilst the status of women has, very broadly speaking, seen improvements in recent years, there remain embedded inequalities between men and women globally. If we are able to understand the mechanisms that bring about change in diverse contexts, we can better develop strategies to define goals which envision and enable the achievement of gender equality. 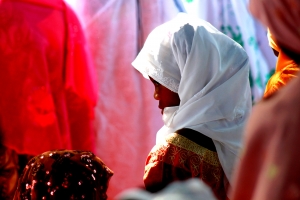 A young girl at the praying ground in Gunjur

So, in light of this discussion, what should be on the agenda for gender equality post-2015? My experience in The Gambia leads me to feel that the post-2015 agenda should seek to challenge the underlying causes of gender equality as well as to promote empowerment in a more meaningful sense. MDG 3 – which aims to ‘promote gender equality and empower women’ – has offered a limited view of what ‘gender equality’ and ‘empowerment’ mean (when these are taken to be the ability of men and women to make choices and to access opportunities, freedoms and resources), by framing the goal in the context of eliminating gender disparities in education alone. However, the three indicators used to measure whether the goal is being met – 1) female education enrolment rates and literacy rates, 2) the share of women in non-agricultural paid employment, and 3) the number of seats held by women in national parliaments – offer a wider, though far from comprehensive, picture of what is required to achieve equality and empowerment. Going forward, these targets and indicators should be aimed at achieving transformative change, rather than focusing on opportunities (i.e. related to education, employment and inclusion at government level) which reflect (possibly) more temporary shifts. For example, the number of female representatives in parliament is subject to significant fluctuation over time unless, of course, quotas are introduced (which, in themselves, raise questions about the true nature of the ‘equality’ they create). Therefore, whilst this indicator can hint at broader factors (educational level of women, perception of women’s ability to undertake leadership roles, etc.) it is not necessarily indicative of an egalitarian society. As this discussion has touched upon, formal institutional reform often masks the reality of what is expounded by the informal ‘rules of the game’.

Whilst it would be impossible – and inadvisable – to try and create a goal which adequately captures all ‘requirements’ for the realisation of gender equality in divergent contexts globally without it becoming, essentially, a cumbersome checklist of actions, it is necessary to think more broadly than the existing framework has allowed. Targets and indicators need to be looking more intrinsically at inequality between men and women – at the power imbalances which exist in the domestic, as well as the public, sphere; at issues of access and control over resources; and at whether women in decision-making positions actually have a voice that is heard.

Gender certainly needs to be on the agenda and we need to be sure that, when it is, we are looking at the bulk of the iceberg and not just the tip. 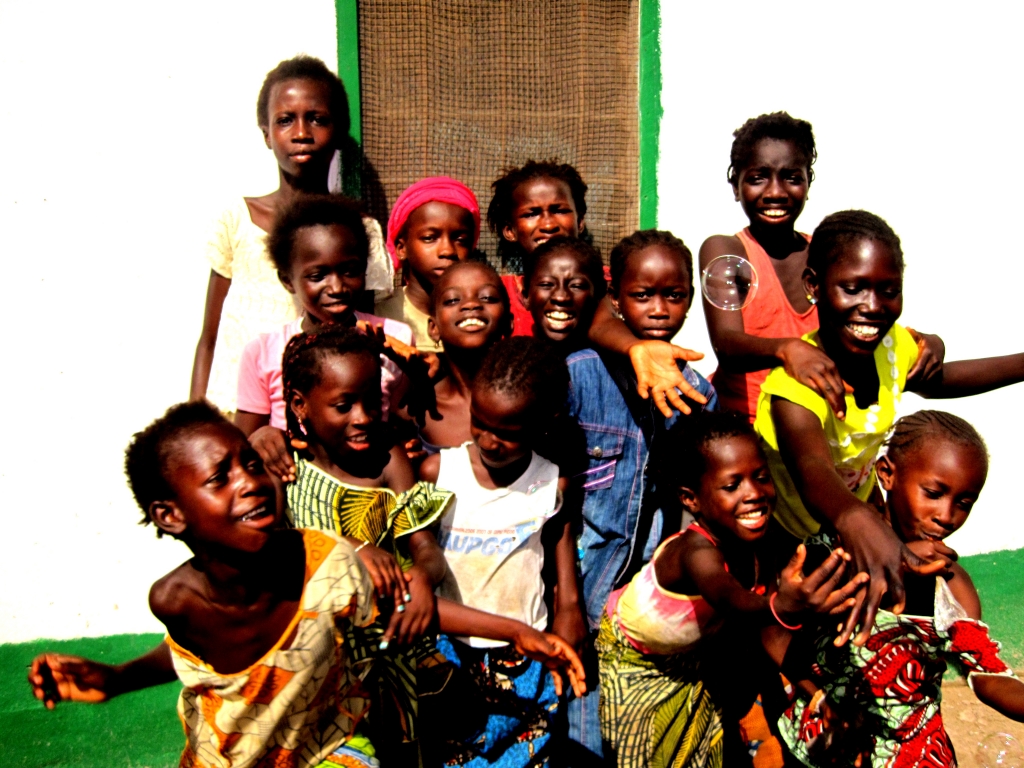 Men = the ‘missing’ half of the gender equality equation